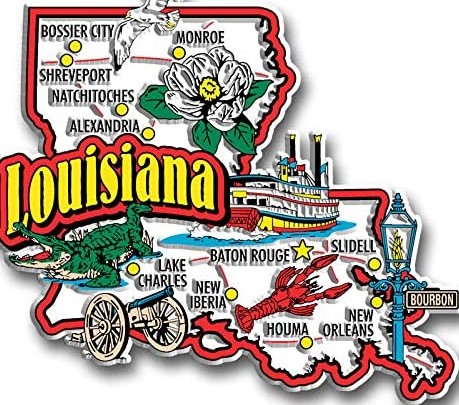 Important Cities
New Orleans, Louisiana’s economic and cultural hub, is a world-famous tourist destination and one of the most historic cities in the nation. Located on the Mississippi 100 miles upriver from the Gulf of Mexico, New Orleans is a key port city for the southern United States. Known as “the Big Easy” in part from the carefree lifestyle associated with the city, New Orleans is home to a unique blend of Cajun, African, French, Spanish, and Native American cultures. The weeks-long Mardi Gras celebration held throughout town is one of the most famous Carnival celebrations in the world.
Baton Rouge is the state capital and the second-largest city in Louisiana. The city, known as an industrial center with an emphasis on oil refining and chemical manufacturing, has developed a recent reputation as the most technologically advanced city in the state. Shreveport is the largest city in the northwestern portion of the state and is also an important commercial center, as it borders areas in northeastern Texas and southern Arkansas. Lafayette is a major metropolitan area with a strong tourism industry and deep roots in both Cajun and Creole culture.

Many Cultures Become One
The idea of the American cultural “melting pot” has no better example than the diverse mix of peoples found within Louisiana’s borders. The state’s history is a tale of continuous settlement and colonization, first by Native peoples, then by French explorers, Spanish forces, African and Afro-Caribbean peoples and American pioneers. The result is one of the most demographically complex populations in the world. Creoles were originally the American-born descendants of European settlers who came to the colony in the early 18th century. Today the Creole population is characterized as a group of mixed-race, French-speaking and Roman Catholic people. Cajuns are the descendants of French-speaking Canadian settlers, who retain their own unique culture. In addition to these two groups, Louisiana is home to innumerable combinations of white, black, Hispanic and Native American ethnicities.

Anything for a Party
With the diverse mix of peoples and defining areas of the state, there is always a celebration or festival somewhere in Louisiana.  Be it the local food, crop or bounty, there are festivals celebrating everything from Strawberries, Sugar Cane, Cotton, Rice, Shrimp, Oysters, Frogs, Jambalaya, and Gumbo.  There are celebrations for being Italian, African American, German, French, Cajun and more!  Always something fun to choose from!

Cuisine with a Kick
Louisiana’s unique cultural makeup has created two famously original styles of cooking: Creole cuisine and Cajun Cuisine. Creole cuisine has hints of Italian cuisine and tends towards classical European cooking styles adapted to local ingredients. Examples of Creole cuisine include turtle soup and crawfish Etoufee. Better known across the U.S. is Cajun cuisine, which adapts rustic French cuisine to local ingredients such as rice, crawfish and sugarcane. A Cajun meal is usually prepared in three pots: one for the main dish, a second for rice or grains, and the third for the vegetable dish. Jambalaya and spicy gumbo are two of the most famous Cajun dishes.

Economy/Industry
Agriculture remains an important part of Louisiana’s economy and culture, as some 30 percent of the state’s total area is comprised of farmland. Cotton, sugarcane, and soybeans are the most important crops of the state and poultry is the primary livestock. Our waters, both inland and offshore, produce fishing catches rivaled only by Alaska in value, with an emphasis on shrimp, crawfish, oysters, and catfish. Louisiana is also one of the leading lumber-producing states in the nation.  Immense fossil fuel resources drive a thriving mineral production industry. Oil and natural gas are produced in large quantities, particularly along the Gulf Coast and in the northern regions of the state. Other key industries in Louisiana include chemical production, transportation, and of course - tourism.