This page was written entirely by Susan Langlois. These stories, tales, and tidbits are based on local folklore and tales handed down for generations in Louisiana. This information is not intended to be documented fact, but rather for the entertainment of the reader. All rights reserved.

Many phrases and words are uniquely Louisiana’s. Some are just Deep South dialect with a twist. Most are French in origin, and while sadly this language is fading with each generation, some remain.

Bayou (buy-you) – natural waterway navigable at least for a pirogue

Laissez les bon temps rouler! – (Lay-zay-lay-bon-temp-rou-lay) “Let the good times roll!” Often heard at the kickoff of a party, festival, celebration or as a Mardi Gras float rolls out, or any time fun is anticipated. Always expressed with an exclamation!

Lagniappe (lan yap) – often used; it means a “little something extra”, like when a person orders a dozen raw oysters and they are given 13 –that’s lagniappe!

Roux (rue) – “first you make a roux” has been the buzz phrase of Louisiana cooks for 200 years.  Many Louisiana dishes begin with a roux.  This is a mixture of oil and flour cooked to light brown for seafood and dark brown for meats

Fixin – means one is getting ready to or thinking about doing something. i.e.: “I was just fixin to come over to your house”.

Axe – used quite often as “let me axe you something”. Not meaning they wish to chop something for you nor reference to any tool. Just means they wish to ask you a question.

Zinc – heard mostly around the New Orleans areas and not to be confused with a metallic element, it is just some folk’s pronunciation of Sink!

Wrench – i.e.: “go wrench the vegetables”. Does not refer to using a tool on the vegetables, nor a reference to the Louisiana version of the food processor, but rather just someone wanting the vegetables Rinsed!

Sha – a kind or sympathetic term. Derivative of the French word Cher or Cherie. A one word statement that can mean “isn’t that cute”, “isn’t he or she sweet”, or even "poor thing".  Most often a reaction to a cute kid or baby. Also can mean honey or darling.

Fais-do-do (fay-doe-doe) – A Fais-do-do was a party where Cajun grownups danced “up front” while their children were put to bed “in back” of whatever building or home where the party was being held.  Acadian French of Louisiana love their music and dancing. Though Fais-Do-Dos are a thing of the past, it is still a custom in Louisiana for parents to bring their children almost anywhere they go. In French the words literally mean “to make sleep” and still today, when parents announce bedtime to their little ones, it is expressed as - “time to go do do”. 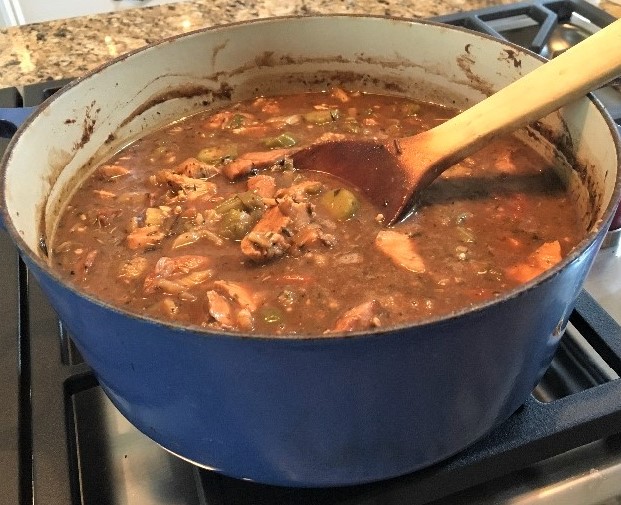 Louisiana is steeped in mystery and intrigue, from ghosts at the old plantations to voodoo in the French Quarter, from monsters in the swamp to pirates in the Gulf. Here are a few of the colorful stories and characters of the state.

Loup Garou or Lougarou (French for werewolf) - Some tales depict this figure as a ghost, some a demon or monster, and in other versions Lougarou is half man and half animal. However, no matter the version, he is always a horrible creature that roams the swamps of south Louisiana. There are tales of Lougarou back to the first landing of the Acadians, who it is said acquired the stories from the local Indians. No matter the version told, Lougarou has always frightened the children of south Louisiana from venturing alone near swampy areas - perhaps the reason for his creation!

Ghosts along the Mississippi – With mansions of old and decades of history, there are volumes written about the ghosts of Louisiana. Houmas House is said to have several in residence and Laura has her “Creole Children”, who are often seen playing along the stairwells. And then there is The Myrtles in St. Francisville, LA which has been dubbed one of the most haunted houses in America and featured on several television shows. Open to the public and a Bed and Breakfast, many people from the Baton Rouge area who visit The Myrtles have returned with tales of ghostly sightings.


Jean Lafitte, “Pirate of the Gulf” – He was one of Louisiana’s most colorful residents. This “gentleman pirate” was a legend even in his day, called “The Hero of New Orleans” by some and “The Terror of the Gulf” by others. Part of the Louisiana Purchase, south Louisiana was a bit of a problem early on for the government. With vast marshlands and misunderstood inhabitants, it was considered a “wasteland” and basically the area became overlooked, providing a grand opportunity for the likes of Jean Lafitte. With ships and crews, he stole from foreign freighters and sold the wares in the streets of New Orleans and along the bayous. He was condemned by two U.S. Presidents as an outlaw, yet considered himself a gentleman. Lafitte was the first to volunteer to protect the mouth of the Mississippi from enemy hands during the Battle of New Orleans, which gained him exoneration by another President.  One can visit Lafitte’s blacksmith shop, one of the oldest buildings in the French Quarter where this complex character conducted both legitimate and questionable business. 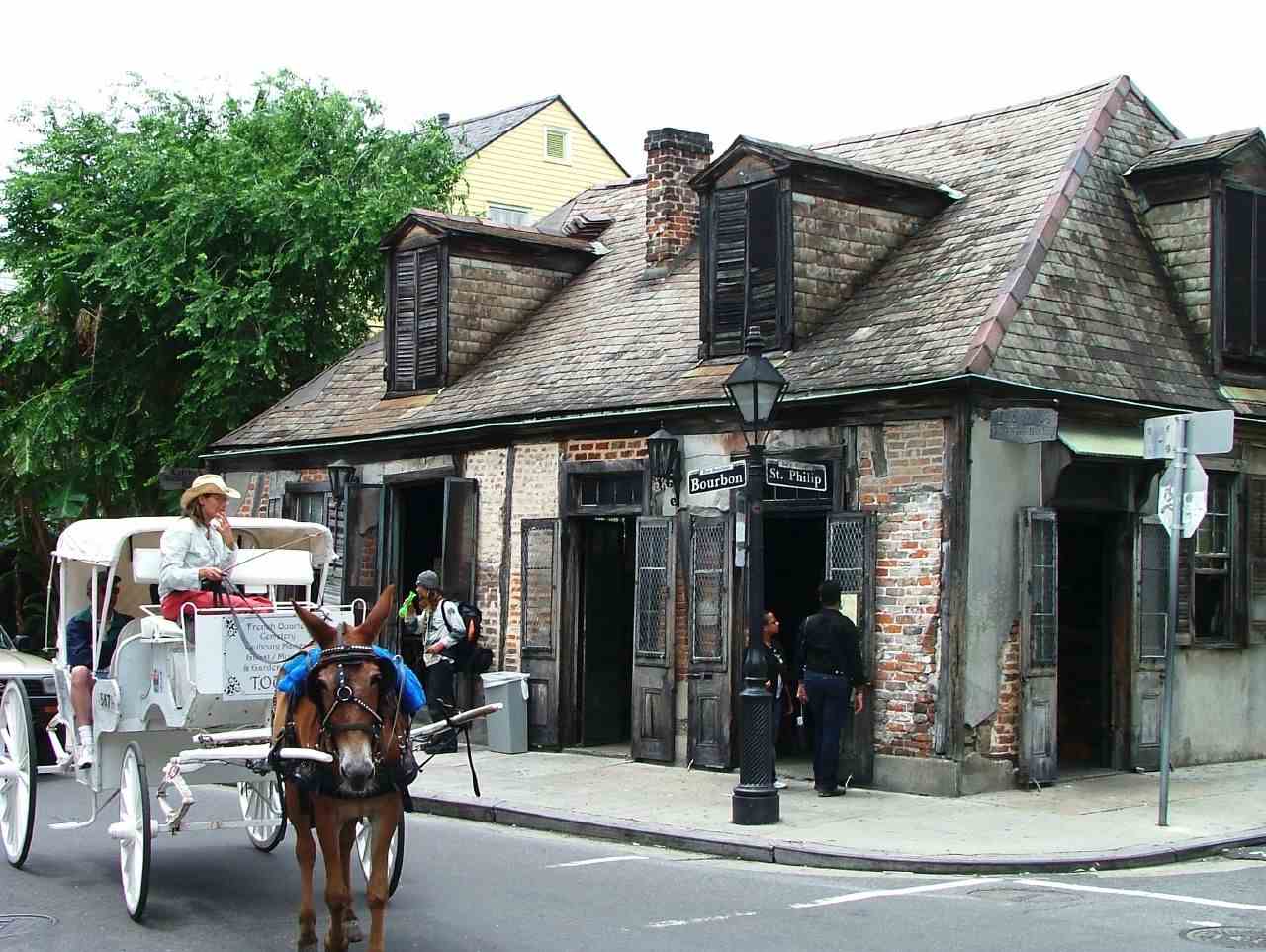 The name Baton Rouge means Red Stick in French. When d’Ibervile sailed up the Mississippi in 1699 the spot was the first high bluff north of the Gulf of Mexico. Two local  Indian tribes resided in the area and the bluff divided their hunting grounds. A dead cypress tree, looking more like a giant stick, stood atop the bluff and here the Indians hung animal skins and fish to mark the hunting ground division. The tree was so stained with blood, it appeared to be a Red Stick.  Hence the name.

The lace-like Spanish Moss that gracefully drapes trees of Louisiana is neither “Spanish” nor “moss”. Actually, it is an epiphyte or air plant. The Indians called it “tree hair”; the French “Spanish Beard” and the Spanish called it “Frenchman’s Wig”. By any name, it is a sight that is well known and loved in the Louisiana landscape.

The Battle of Baton Rouge was the only battle of the American Revolution fought outside of the original 13 colonies.  The British were trying to move up the mouth of the Mississippi River to secure lands further north.  In Pointe Coupee Parish, about 30 miles north of Baton Rouge, there are still tales of the "Pt. Coupee Militia", a volunteer group of soldiers from the New Roads area who fought in this battle.  Rosedale Road in West Baton Rouge was these soldiers’ dirt path of travel to and from the battlegrounds.


Baton Rouge boasts the first Pentagon buildings in the U.S. in the four 2 story buildings known as the Pentagon Barracks near the State Capitol. The buildings are thought to have been built around 1824 and have been continuously occupied for nearly 200 years, though with diverse occupants. The buildings have served as army posts, a Civil War headquarters, the first campus of LSU and the site where General George Custer activated his Seventh Cavalry of Little Big Horn fame.

Dr. Titchenor’s Antiseptic was introduced to the world in Baton Rouge during the Civil War. Dr. George H. Titchenor was wounded in Baton Rouge during the war and by the time he received medical attention it was determined his leg would have to be amputated. Protesting, he left the army hospital without leave to stay in a friend’s private residence. It was there he developed the antiseptic which brought him fame and fortune, but also saved his leg.


The origin of Dixie, nickname for the south, has two versions. One is a reference to the Mason – Dixon line, which separated north and south during Civil War days and the other involves New Orleans prior to the war. In a booming economy, the banks in New Orleans were lined for miles with ships as there was not enough warehouse storage for all the cargo in port. The boatmen would leave ship wishing to spend their money but were met with a quite issue.  New Orleans at the time was divided between the Americans on one side of Canal Street and the Creoles on the other side in the French Quarter. The $10 bill was the prevalent bill of the day, and the boatmen found themselves in need of French tens on the Creole side of town and American currency on the other. An industrious New Orleans bank solved the problem by printing the word Ten on one side of the bill and Dix (ten in French) on the other side. It is said the bills became known as “Dixies” among the seafarers and later referred to the south in general.